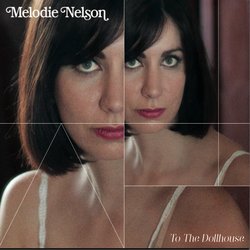 Melodie Nelson has been quick to craft a name that invites playfulness and pop hooks with syntactic melodies. ‘To the Dollhouse’ continues this while balancing a dark human nature with the light air of desire, and produces a record that proudly evokes the grainy projections of 1960’s and 70’s cinema, the soundtracks of Dario Argento, and memories of the golden years of dreamy 60’s psychedelic – grander and more colourful than its predecessor.

This is an album that sees Melodie Nelson cast herself bravely into her own sonic world, one that’s awash with twangy guitars, driving synths and layers of harmonies upon layers of orchestral distortion.

Melodie Nelson is the solo moniker of seminal Sydney musician Lia Tsamoglou (previous Moon Milk/Rand and Holland), the standout songwriter is joined live by Kell Derrig-Hall (Bass), Hugh Boyce (drums), Travis Baird (guitar), Monica Brooks (Keys/Vox) and the omnipresent Robin Dixon on Cello. This past year was marred with intensive songwriting and developing a holistic live performance as visual as the recordings. In the past 12 months Melodie Nelson live has shared a stage with the likes of Twerps, School of Seven Bells, Joe McKee and Father John Misty.


First single ‘Martha’ showcases the dramatic and cinematic flair that pervades the new record, in the form of a lead single that is both thickly atmospheric and melodically catchy, despite lyrics that recount a murdered wife’s vengeful haunting of her husband.

Other tracks by Melodie Nelson: Spin The Bottle  -  Carry Me
%