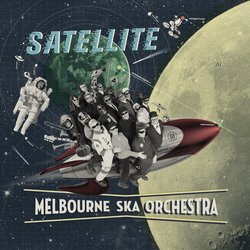 The mighty Melbourne Ska Orchestra will release their sophomore album ‘Sierra Kilo Alpha’ in February 2016, and have already given us the first taste of the album with the new single ‘Satellite’ – out now.

Add to this appearances on national TV including Rockwiz, three ARIA nominations, Best Live Band award (The Age), Best Ska/Reggae Album (Ready Steady Ska-UK) and soundtrack for an award winning British film, ‘Beverly’, it's safe to say that this Skatastic Juggernaut has earned its Space Stripes.

The Melbourne Ska Orchestra’s live performance is nothing short of spectacular, sometimes tipping the 30 player mark, and with the approval of Reggae and Ska pioneers like Stranger Cole, Owen Gray,Carlos Malcolm, Ranking Roger and Neville Staples to name a few, they are resonating with audiences worldwide, young and old.

Cadets! - Get ready for the relaunch.
Satellite Stations Systems Go!


‘Riding on a Satellite’ is a metaphor for flying high when the balance is right, a little like ‘Walking on Sunshine’ with a cosmic twist!