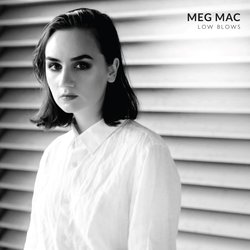 MEG MAC is back, burning bright with her keenly anticipated debut album ‘Low Blows’; a powerful set of dynamic, deep soul, exhortations that have an all-enveloping atmosphere and presence; “Low Blows” is distinctly and uniquely MEG MAC.

In 2014 MEG MAC was named Triple J’s Unearthed artist of the year; the station spearheaded her trajectory worldwide, playing multiple tracks from her highly acclaimed debut EP. ‘Roll up your sleeves’ was played on radio across America and featured in the US TV series ‘Girls’ and ‘Grace and Frankie’. In 2016 she was in Triple J’s Top 5 ‘Unearthed’ discoveries of the last decade.

Meg has played Festivals and sold out shows in Australia, America & UK but the most momentous was with D’Angelo. “The most inspiring was the ‘Black Messiah” tour with D’Angelo, I learned what it was to tour America, it was all real and that’s the magic. ” Meg explains “We played theatres, from LA, across the South and up to New York where I also played with Gary Clark Jr”.

Gary Clark commented “I heard this voice. I was blown away by how powerful her voice was and how cool she was. It blew my mind. She’s amazing”.


Melbourne singer songwriter MEG MAC reveals the newest single ‘Ride It’ from her long awaited second album, LOW BLOWS which recently debuted at #2 on the ARIA album chart.
Ride It was recorded in Fort Worth, Texas with Niles City sound and mixed at Electric Lady in New York.