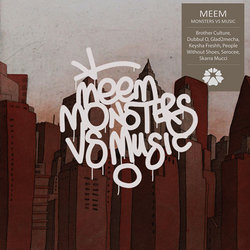 Meem is a celebrated music producer from Sydney. Credited as a pioneer in electronic music making in Australia, he has continually brought a fresh angle to the world of beatmaking and music production.

With 7 critically acclaimed releases, he has also remixed Mr Scruff (featuring Roots Manuva), and the ARIA winning ‘Sweetness and Light’ by Itchie & Scratchie. Meem's albums have been "Album of the Week" on FBi, 2SER, PBS, RTR and Eastside. In 2008 "The Bumpy EP" was nominated for an AIR award.

Meem has performed live at The Big Day Out, Vivid and Parklife, and supported Thievery Corporation, Groove Armada, Jamie Lidell, People Under The Stairs, The Bamboos, Tower Of Power and Sharon Jones & The Dap Kings. Meem has DJ'd countless residencies including The Opera House Bar and The Famous Speigeltent at Sydney Festival.

Meem hosts the long-running show Back To Funk on 2SER107.3. On air since 1980, Back To Funk is Australia’s longest running funk music radio show..