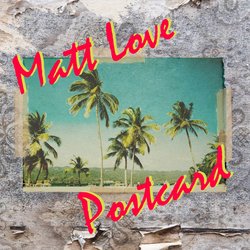 From a time when hair was big and the glitter was cheap, Matt Love brings you the Orchestral Country Pop you would normally associate with Glen Campbell or Charlie Rich, but with just enough edge to make it real.
Matt Love is the founding songwriter for legendary Sydney indie pop group Even As We Speak who were successful in the UK in the early 1990's. Even As We Speak continue to attract wide critical acclaim with their latest release and are touring the UK in July 2018.

Matt Love's songwriting skill has received praise from John Peel, and British Music Magazines NME and Melody Maker. Matt Love and Even As We Speak remain largely underrated in Australia despite their cult influence in the UK and the USA.
Matt's first solo album "Bad Motel" was an exploration of primitive hokum hillbilly and holler music.

Matt’s new single Postcard is a new direction yet again.


Postcard is country pop reminiscent of the orchestral pop of the late 60's or early 70's. A traditional country tear jerker, starting raw and unadorned and then gradually building to a lush string crescendo. You may cry in your beer.