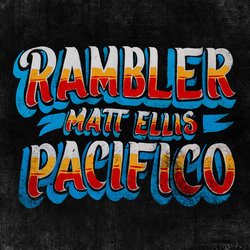 Matt's sound is a blend of Rock, Country, and Folk reminiscent of Tom Petty, Neil Young, and The Band. He sits comfortably on the Rock end of the Americana genre, although his roots are firmly planted in Australian Pub and Garage Rock of the 80s and 90s.

He's shared stages with Paul Kelly, Kasey Chambers, Calexico, The White Buffalo, DeVotchKa, and LeAnn Rimes over the years and numerous tracks have been licensed in the US by ABC, LMN, MTV, The Food Network and Qantas back home. Matt's signature song, "Heart Of Mine", recently made its cinematic debut on James Franco's "Hey Day Of The Insensitive Bastards" alongside Natalie Portman, Kate Mara and Matthew Modine.

His new album, “Rambler Pacifico”, is a stream of folk-rock consciousness. A ramble of plain truths in a time of fake news. A collection of songs that speak to these times yet feel timeless. Recorded primarily in Ellis’ garage, these 11 songs kick and caress in equal parts. Mixed by Nathan Sabatino (Dr. Dog/Giant Sand), there’s enough twang to remain in the Americana club, yet there’s also a pop sensibility calling to a wider audience.


"Isolationist Blues" is the lead track from Matt Ellis' new album, "Rambler Pacifico". It's a soul stomping rock song sweetened by pedal steel and Calexico's horn section, with a lyric that responds to the rhetoric spilling from the White House.

Other tracks by Matt Ellis: The Lucky Ones  -  The Kids of America
%