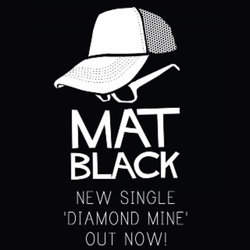 Mat Black is an alt-country singer-songwriter based in Melbourne. With a tendency toward the dark and melancholic, his songwriting and performance, while unmistakably unique, have drawn comparisons to artists such as Jay Farrar, John Doe and Johnny Cash.

After a hiatus of sorts, 2017 saw Black perform feature spots at both the Brunswick and Leaps and Bounds Music Festivals and focus on recording his debut solo EP ‘One Man Ghost Town’. The EP, which was at one turn gentle and reflective, while at the next, exploded with a menacing, rhythmic energy and intent, was extremely well received by peers and fans alike.

2019 sees the release of Mat’s debut LP "Trucker Caps & Heart Attacks" - a showcase of deeply personal and honest songs that lay the soul of their writer bare in a brooding exposé.


"Diamond Mine" is the first single from alt-country singer-songwriter Mat Black’s debut LP "Trucker Hats & Heart Attack". It draws heavily on a deep connection with Southern Rock and that 'dirt-in-your-ears' sound.

Dirty guitars and a screaming harmonica solo punctuate this track, giving it a definite country-rock feel. For lovers of Neil Young, Steve Earle and Drive-By Truckers.