Maryen Cairns - The Mouth Of The Goddess 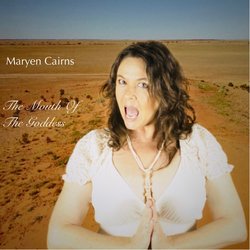 Musicians and writers like Maryen Cairns continue to evolve creatively after their twenties have passed, seeking a deeper exploration into their psyche. Her maturity has enabled her to re-emerge with diversity, fearlessly exploring genres and textures, writing and performing from her authentic heart and real life experience.

Although to the general public Maryen is a new face, she has worked for many years on her craft, which has taken her both across Australia and around the world. Based in London for a decade working with world class musicians, raising a family on an off-the-grid mountaintop in South East Queensland, working with children in remote communities in Western Australia helping them write their own stories into song, writing a show telling the stories of Australian women, taking it on the road with her own family in a caravan covering 18,000 km, and all the time writing writing writing, with a fascination for both the imagined, the deep spiritual world and very real history (which often proves stranger than fiction), Maryen has continued to develop as a singer and songwriter, as evidenced in her new album COME TO ME.

Produced by Chris Kimsey, the album COME TO ME is released 22 February 2019.


The Mouth Of The Goddess is released 14th December 2018… Cuban inspired world fusion music telling a vision of actual physical possession by the Goddess, who desires “to be worshipped by man”.

This is the 2nd single from the forthcoming album COME TO ME, which is released 22 February 2019