Marty Rhone - Graceland on the Line 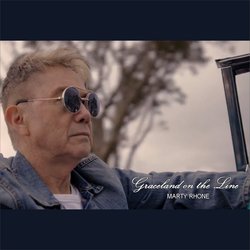 Now in his sixth decade as an entertainer, Marty Rhone has had a remarkable career. Born in Indonesia and raised in Darwin and Sydney, he first found fame as a 13-year-old singer on kids’ show 'Kaper Kabaret'. At 17 he was a support act for The Rolling Stones on their historic 1966 Australian tour.

By the 1970s Marty was also acting, appearing in classic Aussie soaps 'Number 96' and 'Class of ’75'. He soon reached pop heartthrob status when his 1975 smash hit single 'Denim and Lace' peaked at number two on the national charts.

Musical theatre was a natural progression and over the following decades he starred in many productions including 'Godspell', 'God Save the Queen', 'The King and I', and 'Jack the Ripper'.

Recently Marty has featured in 'Neighbours', 'Wentworth' and 'The Doctor Blake Mysteries', and has been shooting some films in the US where his love of music has been revived.

'Graceland on the Line' was co-written by fellow Aussie entertainment icons, Johnny Young and John St Peeters and is a tribute to the man who inspired Marty to become an entertainer, Elvis Presley.


Featuring Marty Rhone's well-remembered rich, warm voice 'Graceland on the Line' is a heartfelt tale of unrequited love, arranged in a retro country style not too dissimilar to some of Elvis Presley's own ballads.