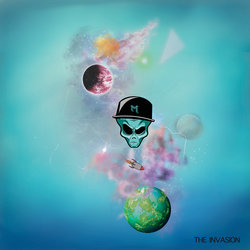 Martian (Formally known as MiniCoop) has steady been making waves in the Australian hiphop scene for the past 3 years now.

Gaining rapid attention from artists and fans across the nation with his homages/covers of other artists in the scene Martian took an original twist by recreating the songs from scratch and playing the instruments himself showcasing his musical skills as well as his mixing ability.

Martian made it his goal to push stylistic boarders in hiphop for Australia making sure that on every single project there was not one song that shared a stylistic influence or sound with another giving fans a huge selection of styles to choose from ranging over 5 self written projects all of which were 100% written/recorded/mixed as well as all the instruments played by Martian from his room.

After breaking out of the local circuit Martian showed national audiences that he’s a contender boasting multiple supports with some of Australia's biggest including Seth Sentry, Pez and Illy, as well as international artists such as Futuristic (World tour), Mad Child and Chris Webby. He also took part in the 4Fins East Coast tour in April, seeing him play packed shows in all capitals.


Gravity is a downtempo, feel good track about persistence, self actualization and chasing your dreams. When writing the track Martian took inspiration from his classical music background, beginning with the keys, followed by the minimalist strings to form a fusion of contemporary hip hop production and organic instruments to create a truly cinematic listening experience.