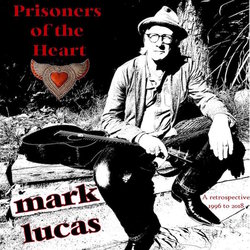 The trajectory of Mark Lucas’s career is akin to tracing a bird in flight. Perpetually restless, banking and diving and always observing – it is these characteristics, among others, that allow his unique lyrical view on the world.
In Sydney, his home since 1981, Lucas wears and has swapped an awful lot of hats - venue manager, band booker, activist, Native American arts trader, company director; moreover, he is a prolific singer-songwriter whose productive output is as inspiring as it is diverse.

Whether working with his long-time backing group, the Dead Setters, or crafting his own guitar-and-voice meditations, Mark captures something special from the crumbs of the everyday. Like one of his inspirations, Guy Clark, he makes plain the idea that “some days you write the song/ some days the song writes you”.


Taken from the recently released 20-track retrospective CD Prisoners of the Heart,drawn from Lucas’s ten-album output since 1996, ‘Shopping Town’ is a cautionary meditation on commercial enterprise taking on real lives, a release whose timing might be seen as particularly apt with a landmark state election in the offing.