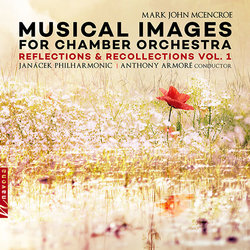 MCENCROE was born in Sydney, Australia. He came to music later in life and began studying piano seriously at the age of 37. Not having studied at a formal musical establishment, he studied composition privately with Margaret Brandman in Sydney. He also studied orchestration with Mark J Saliba and continues to work with Saliba on many projects.

Having come from a restaurant family background, McEncroe was a professional chef for most of his working life. However in his 20s, having possessed a strong interest in different styles of music, McEncroe worked in the music business as a label manager with EMI in Australia and Sweden.

McEncroe now records with PARMA Recordings in the United States and has released two volumes of piano pieces as a double album, MUSICAL IMAGES FOR PIANO with pianist Yoko Hagino. He has also released multiple orchestral works with PARMA: DARK CLOUDS IN LIFE, SYMPHONIC SUITES 1 & 2: A MEDIEVAL SAGA, MY SYMPHONIC POEMS, and LIVE IN OSTRAVA, which have been recorded and performed in the Czech Republic by the Janáček Philharmonic Orchestra. Some of McEncroe’s orchestral repertoire has also been performed by the Ruse Philharmonic in Bulgaria and the Zagreb Philharmonic Orchestra in Croatia.


The original conception of both Volumes 1 & 2 that I wrote for piano was an expression of me looking reflectively and nostalgically back on my past life which has been a wonderful mixed bag. As such, these pieces can best be described as very personal.

Other tracks by Mark John McEncroe: A Fish With the Blues