Margaret Anne and the Rock It Man - Soul Laid Bare 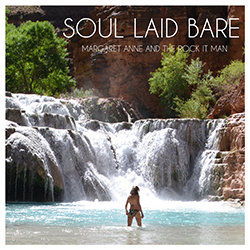 Currently she performs as lead singer, and guitarist with successful south coast band: Firefly. She has written original songs including ‘Don’t Look Back’, with country artist Shane Nicholson and ‘Cassidy’s Blues’ with Kelly Brouhaha of Beccy Cole and the Lionesses. Margaret Anne is currently working in collaboration with producer Doug Weaver on the debut Album ‘Soul Laid Bare’.

Doug is a talented multi-instrumentalist, producer and screenwriter. He has produced and written music for MythBuster and for many local productions including Border Security and Beach Cops.

Their first single Soul Laid Bare is out this month to be followed by the full album in March 2020.


Aussie style Americana is making a big impact and this tune truly fits the bill. With some brilliant harmonies and guitar playing this is a true standout and awesome debut- think Sheryl Crow meets Kasey Chambers.