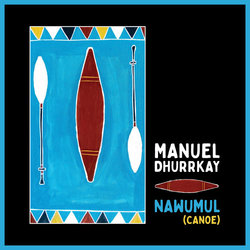 Twenty years on from the release of the legendary Saltwater Band’s first album, its enigmatic frontman Manuel Dhurrkay is releasing his debut, solo single Nawumul (Canoe); a funeral song paying respects to the departed and honoring their legacies left behind sung in traditional Yolngu language.

Few southerners understand the fame carried by legendary Elcho Island musicians Saltwater Band, but wander through Arnhemland and few could reach the respect and inspiration carried by these giants of song.

The Yolgnu band is famous not only for the legacy of global superstar Gurrumul, but also for their three successful albums which received ARIA and APRA nominations as well as a coveted Deadly Award, sold over 5,000 copies and spawned decades of successful touring across the Top End and beyond.

Throughout his journey as Saltwater Band’s lead, Manuel Dhurrkay has proven himself a dynamic live performer, songwriter and confident contrast to songwriting partner Gurrumul’s quiet nature, creating a legacy together, known in some circles as the Top End’s Lennon and McCartney.


Nawumul (Canoe) was originally written and performed for the funeral of legendary Soft Sands Band singer Big Frank Garrawitja, the song is a means of honouring the legacy of the departed left behind that continues to inspire young Elcho Island musicians.

Through Nawumul, we see the memory of the departed getting smaller and smaller as they disappear upon the horizon.