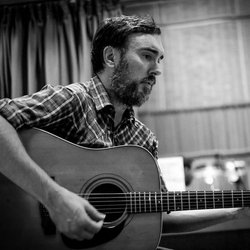 After releasing his superbly underrated debut album in 2007, Dan got married, became a father and started a job as a social worker. Some might have thought his musical output would wane... it didn’t. Instead he transformed his garage into a home studio and recorded, produced, sampled and performed almost every single note on Major Chord’s next two albums - The Rabbit
Hole (2009) and the highly praised Psychic Civil War (2011).
The ‘transition’ began with the sudden death of Dan’s father
and the fortuitous meeting of new musical companions; multi- instrumentalist and vocalist Meabh Friel, drummer Aaron Pepper (International Karate) and bass player Phil Collings (Sophie Koh, The Guild League). Dan wrote new songs and the band brought new energy, new meanings and a powerful new sound. After receiving a grant from Arts Victoria the band blazed into Newmarket Studios to create, what is undoubtedly, Major Chord’s most important piece of work to date.


Major Chord releases ‘Everything Is Everything’, the first single and title track from their forthcoming third album.

Other tracks by Major Chord: Transition
%