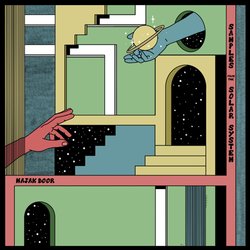 With influences that are broad and inclusive of many genres, Majak Door combine a mixture of surf-rock, 60's psychedelia and dream pop to produce the wavy, tropical lo-fi sound that the band are known for.

The first seeds of Majak Door were planted back in 2014 with founding members Frank and Ronnie, who later onboarded drummer Joe, guitarist Louie and keys player Joe. As they’ve prepared to expand to five members, Majak Door have also juiced things up on the live side, with the addition of conga player Max. Previously, on the live side, Majak Door have supported the likes of PLANET and Seaside and sold out their headline show at Melbourne’s Yah Yahs.


“'Samples from the Solar System' includes a handful of songs from the bands' ever developing catalogue, with the sounds ranging from upbeat surf-pop all the way to psychedelic slow-burners,” explains front man Frank.

Other tracks by Majak Door: The Magic Door  -  The Snooze
%