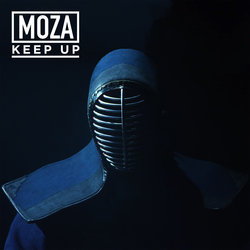 ‘Keep Up’ sees MOZA go deep musically and emotionally, reflecting on the nature of the music industry. Written when the pair had just quit their day jobs to throw their energy into music full time, the track which came together in just one night but they knew straight away that they had their next single.

Named as one of the 17 Electronic Artists To Watch in 2017 by Pilerats, MOZA place a strong emphasis on performance, bringing huge energy, live instruments and all of the lights to create emotional and mesmerising shows. This love of stagecraft has seen them support high-profile acts Paces, Kilter, Touch Sensitive, Running Touch, Hayden James, and L-FRESH the LION.

In addition to their passion for hard-hitting electronic music, MOZA have a talent for songwriting and canny pop sensibilities that have led to writing and producing credits on tracks with Paige IV & Tina Arena to name a
few. They’ve featured on Just a Gent’s recent single “You’ll Never Know" as well as singles by Kilter, LFRESH the LION, Maxx Baer and Axel Boy.


With soulful, visceral vocals and dirty sub-bass, 'Keep Up' is a song from the heart. The melancholic aspects are tempered with a sense of stoicism though, reflected in the new music video produced by YeahSure.