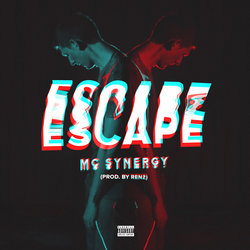 MC Synergy has been a growing presence in the Brisbane music scene for the past ten years, developing his skill set and settling into his element as a creative and content driven emcee. He has released five projects, collaborated with well-known Brisbane artists (such as The Optimen, Pure Product and Luka Lesson) and has shared the stage with the likes of Total Eclipse, and Dead Prez.

In 2016, after years cutting teeth as part of Brisbane crew Tailor Made, Synergy released his debut solo album Waiting For The Collapse. This was followed in 2017 with his latest work No Going Back, a six-track EP produced by the highly skilled HashFinger. This UK native combines smooth samples and live instrumentation with often rugged percussion, creating the spacious environment in which Synergy thrives as an emcee.

Synergy’s recent focus has been on building music with a diverse range of producers in Australia, from Brisbane (Sepnutz and Able2) to Lismore (BeatsJ) to Melbourne (Renz). Abroad, he has connected again with HashFinger for another project, this time collaborating with fellow Brissy-emcee Butta, for what will be one of Synergy’s key releases of 2019.


The single ‘Escape’ is an inter-state collaboration between Brisbane-based independent artist MC Synergy & talented Melbourne producer Renz. The song is an evocative, yet hard-hitting banger about acceptance and creative liberation that is, at once abrasive and self-reflective. It will be released digitally on April 28th and will be followed closely by the release of the film clip.