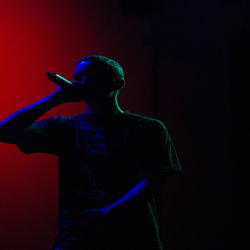 MC Kean is an MC and hip hop producer with an addiction to fat beats and a fetish for microphones, influenced by classic golden era hip hop records and boasting glorious soul samples and epic production from the never ending quest for beautiful, filthy sonic perfection.

Split personality, part jaded cynic and part naïve idealist with a highly enthusiastic alter-ego, he is fighting the good fight for the underdogs and the downtrodden who deserve to have fat beats in their system.

He has headlined major venues in various states and received glowing critiques in Drum Media and Beat magazine and was referred to as one of this season’s “buzz” acts and described as “a conscious MC and serious beat maker with potential mass appeal."

Alternative Media group compared him with the Hilltop Hoods and The Herd and claimed that he wouldn’t be out of place on the same boom box or the same stage.

He has done collaborations with such high calibre US rap artists as Rakaa from the legendary Dilated Peoples, Sareem Poems of LA Symphony fame and Rasco of the world famous Cali Agents.