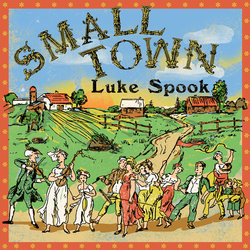 Luke Spook has a magical talent for conjuring up a whole world of surreal folk tales, which he tells through his unique style of song writing. A founding member of Wollongong’s infamous garage punk rock group - The Pinheads, Luke Spook has spent the last few years quietly exploring his own sonic palette at his homestead in Stanwell Park.

Spook's first collection of songs came in the form of an EP called ‘Waking Up / Feeling Bad’ back in July 2018. He is now gearing up to release his debut album entitled 'Small Town', to be released in October 2019.

Gather round for story time with Luke Spook. His collection of eclectic songs draw inspiration from his own experiences, past times and beyond. Likened to the sounds of The Kinks, Donovan, Fairport Convention, The Stones and The Beatles, Luke Spook paints layers upon layers of nostalgic imagery for your ears. His songs showcase an undying love for the strangest 60s Psychedelic Rock, Folk, Eastern ragas and Country twangs.


As described by Spook, “it’s about the dynamics, rumours, secrets and folklore of small towns everywhere. Each town is unique but I think you’ll find the same social politics universally. Most small towns have a strange and interesting history only known to the townspeople, whether these fables are true or not is up to you”.