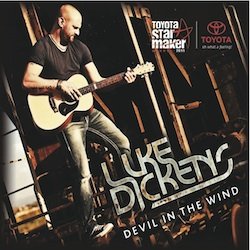 A former shearer Luke Dickens has his own brand of cool county- a little Johnny Cash, a little Joe Cocker and a whole lot of raw talent. The 2011 Toyota Star Maker Winner and Runner Up Australian Idol 2008 is on the road to success after his second release. The brand new album, Devil in the Wind produced by Multi Award winning producer Nash Chambers, will become one of the albums of 2011 to have. Rootsy, country & rock it embodies the kind of musical styling that appeals to a wide audience. Luke’s unique voice along with a vibey band have made this album a great album to listen to on the road. Released on September 9th, Luke will hit the road in October with Luke Austen taking Devil in the Wind on tour. The first of its kind the Cross the Country Tour will see both artists traveling from Tamworth to Perth in their Toyotas taking their music to regional Australia. True Love Never Dies is the first single off the album.


A song about walking out on a relationship but crying behind closed doors. Originally recorded by Kevin Welch 1990, Luke and his band have revamped this classic track for a new audience.
From the very first note this track has a driving beat that instantly has you tapping your feet.