Lucy Burke - Calm Before the Storm 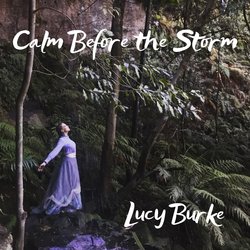 Sydney singer-songwriter Lucy Burke writes and performs music that fuses ambient, acoustic, pop, and jazz styles into her own unique voice. Drawing influences from Lana Del Ray, Portishead, and Norah Jones, Burke's music is varied and engaging. Not one to be boxed in, Burke performs with a broad range of vocal stylings that range from gentle and intimate to powerful and soaring.

Lucy Burke has released three studio albums. With a love of songwriting, storytelling and recording quality music, she delights in working with industry professionals. Her debut album Botany Street, was recorded at Abbey Road Studios, London. Lucy Burke is set to release her latest single Calm Before the Storm, recorded with engineer Luke Bertoz (Tales in Space, Dappled Cities) and has firmly found her musical voice - blending ambient, orchestral with electronic pop sounds.


Calm before the Storm is a song about embracing the unknown, confronting one’s fears and finding faith in yourself during the hard times. The song is dynamic, heartfelt, emotive and cinematic. It follows a narrative arc - from insecurity and fear to confidence and inner strength and is a celebration of overcoming obstacles.