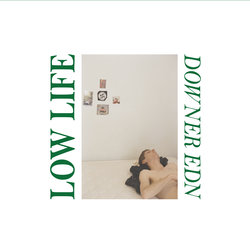 Insofar as Australian noise-punk is concerned, Downer Edn not only shatters the boundaries applied by that descriptor, it does so with the lushest attack conceivable. And like their (admitted) influence enigmatic Ohio legends of obscurity, V-3, never has the f-bomb been (repeatedly) sung in such a believable and poetic manner. The visceral pounding throughout transforms their inspiration (desperation, neuroses, trauma, survival, rehab, hooliganism, violence, healing, hope, rejuvenation, JG Ballard's fiction, and their hometown of Sydney's full architectural scope) from the intangible to the tangible.

Downer Edn sees the core trio of Mitch Tolman, Cristian O'Sullivan and Greg Alfaro expand their ranks to a five piece. Dizzy Daldal of Oily Boys and Orion was brought in to reinforce the thick wall of guitars, whilst fifth member Yuta Matsumura (Orion) joined later to free Tolman up as a dedicated frontman for live duties. The hours of studio work have resulted in making the band sound more confident and fully realized, reaching for a sound that was perhaps unattainable 5 years prior. Downer Edn is a complex proposition and remains a dark blast of an album. Expansive and cohesive, yet shimmering and brutal; something they can be proud to call a definitive statement.


A down and out tour de force - classic downer rock food for the soul, which invigorates and nourishes pained ears. You'll want seconds.