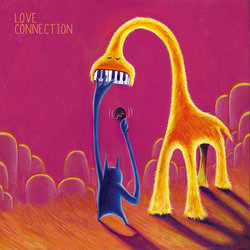 Love Connection are Dean Noble, Kobi Simpson, Nathan Burgess and Michael Caterer. Within 6 months of forming, their debut album was written, recorded, mixed and mastered: an incredible feat considering the subtle complexities of these tracks, which, when listened to through headphones offers a fuller spectral experience of hidden nuances, intricate frameworks, and multi-tracked instruments and vocals.
Hooking up with Melbourne label Sensory Projects (MUM SMOKES, Children of the Wave, The Ancients, etc) was equally rapid in its alignment; label lieutenant Steve Phillips responding promptly to the allure of Love Connection's pop slant, their highly rhythmic flailings, and their inner psych-infused wisdoms.
Mixed by Nick Huggins(Two Bright Lakes), mastered by Tim Sigmund, and with artwork by Cailan Burns, Love Connection describe their self-titled debut album as "a collection of low-fi, synth-based electronica, dabbling in new wave and psychedelic sensibilities with a strong pop influence". They give birth to an amalgamation of vintage keyboards, Korgs and Casiotones, throttling with sparse progressive guitar lines and percussive drum solos, described as “epic pop tunes that feel like a waterfall made of warm, multi-coloured soup rushing over your entire body.” But no matter what it is, it’s a fantastic debut album – hands down.


A prime cut of vibrance from Love Connection, taking in every element of their debut album and their amazing live energies!


Other tracks by Love Connection: I Know You're Real
%