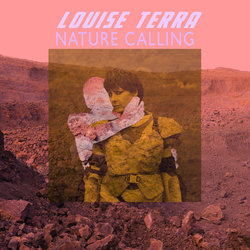 Louise Terra’s fascination with electronic music is in the liminal, the beautiful and weird stuff created between genres. Using the computer as her instrument, Louise Terra single-handedly crafts deliriously hooky songs from layers of vocals, pounding rhythms, and atmospheres of sounds and synthesizers. As gorgeous as they are unsettling, Louise Terra’s style of electronic dream-pop comes from a rich set of influences, yet all of her songs pulse with a similar emotional force. Her songwriting expresses her outre perspective on human nature and her somewhat futuristic take on the existential conundrums of living in such uncertain times.

Over the last six years Louise has been singing in disco out-fit Sugar Fed Leopards, all the while quietly crafting an arsenal of mesmerising solo electronic music. Since releasing her first single Patience on Listen Records compiliation and her second single Waltz on Synth Babe Records compilation in 2016, Louise Terra has been writing and recording new music. Her next single release, Nature Calling comes out on the 2nd August 2019 with a VR video clip shot in 360 degrees.


Louise Terra has birthed an alternate world of synths, beats, and eerie refrains that seem to be plucked from the most unearthly corners of the natural world. Self-produced layers of vocal hooks, pounding rhythms, and completely immersive atmospherics are as gorgeous as they are unsettling, making for a dystopian take on fantasy-pop where Terra reigns undisputed in limitless intrigue.