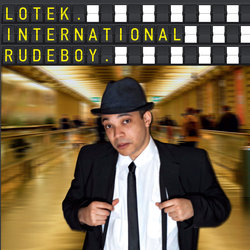 The debut solo album, International Rudeboy, from Mercury Prize winning producer, LOTEK, is primed to ignite the music scene. As summer pushes winter down the cold hard stairs of spring and struts back into our lives, LOTEK brings us his own blend of cheeky UK hiphop laid over traditional reggae and ska sounds.

International Rudeboy offers a rare insight into the musical genius that has already achieved critical acclaim as a producer - with albums such as Roots Manuva’s Mercury Prize nominated, Run Come Save Me, and Speech Debelle’s Mercury Prize winning Speech Therapy under his belt. For the half Jamaican, half Londoner who now calls Melbourne home, this self-penned and self-produced offering is set to follow his past work and please some ears.

Lotek says: “I wanted to fuse the feel good tunes of traditional Jamaican reggae and ska with the lyrical realism and wit that people expect from UK hiphop. They’re two cultures that represent who I am and when combined musically, they create a really original hybrid sound.”


"Sundance" talks about Lotek's seemingly innate ability to bring rainy/cloudy London weather with him. He sums it up in the chorus "Everytime the weather's bad I always take the blame, so come and do my Sundance and take away the rain". This track is dancehall/hiphop featuring Melbourne artist: RuCL.

Other tracks by Lotek: The Rudest Dude  -  Time Makes Fools Of Us All
%