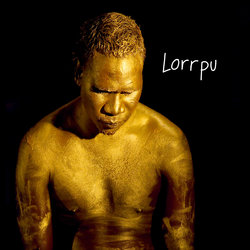 The stand-out feature of a live performance by Lorrpu is his voice, singing in a mixture of Yolngu and English and conveying a depth of emotion as he sings about Aboriginal dreaming stories, gospel tributes and social issues.

This album was recorded at the CAAMA Music studios in Alice Springs. All songs written and sung in Pitjantjara, Gupapuyngu & English by Lorrpu – Vocals, Harmonies, Vocal Arrangements, Piano, Keys.


The demo version of his song “Lorrpu” (meaning White Cockatoo) won NT Pop Song of the Year in 2013 and is based on an Aboriginal legend of his homeland, sung exclusively in the Yolngu language of Gupapuyngu.

This debut album features songs in Gupapuyngu, Pitjantjatjara and English.