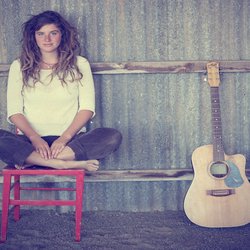 Adelaide Hills based singer/songwriter Loren Kate will release her new studio album entitled, ‘Moving on’ on September 12th, 2013. To celebrate, she will embark on a unique national launch tour with a number of special guest musicians, performing over 20 shows at festivals, venues, markets and house concerts around the country.

Loren Kate’s latest offering, ‘Moving On’ came to fruition through a successful crowd-funding campaign via Pozible.com, where over $16,000 was raised in 3 months from over 220 fans donating funds towards its creation. The record was produced, engineered and mixed by Aria award-winning producer, Paul McKercher (Augie March, Pete Murray, You am I, Sarah Blasko) and recorded over 10 days at Jim Moginie’s (Midnight Oil) Oceanic Studios on Sydney’s northern beaches using Jim’s vintage equipment. It was then mastered by Steve Smart (Washington, You am I, Kasey Chambers, Josh Pyke, Cruel Sea) at Studios 301 in Sydney. The sound that unveiled was timeless, drawing parallels to folk masterpieces of the 70’s but with a contemporary twist, a true testament to Loren’s musical influences; Joni Mitchell, Joan Baez, Carole King and Bob Dylan.

Other tracks by Loren Kate: Moving On  -  I Give You My Love
%