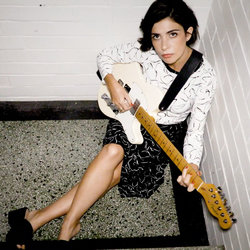 There’s an unlikeness to Sydney Artist Lisa Caruso that left a mark on avid listeners after the success of her first releases. With an utterly unique vocal that bleeds honesty and conviction, Lisa’s songs scream empathetic feelings. Fronting a band full of guts, expect boldness in heart on sleeve lyrics and arrangements nostalgic of the 60’s and 90’s indie eras.

Teaming up with guitarist Benjamin Fletcher (Sarah Blasko, Marina and the Diamonds) on production in the UK and then in OZ has actualised Lisa’s desire to create authentic music. Since impressing Australian audiences with brooding track ‘Shake Baby Shake’ in November last year, the song about invisible illness has raised eyebrows, earning its way onto popular American NBC series ‘Good Girls’. Attaining praise from larger audiences around the world, Lisa accelerated at full speed with single number two, revealing a raucous attitude in ‘A Holiday’.

With plenty more to come, this next release is being described as ‘disrobed and romantic’. Unveiling another layer of her work, ‘Borrow my Body’ is a ‘smooth ride’, as suggested by producer Ben. A shimmering peek into what else can be expected from this charming songstress’ long awaited debut album, due out later this year.


Disrobed and romantic, ‘Borrow my Body’ is layered with warm synthesised piano and shimmering guitars under an honest raw vocal. Kept in time with a lone ride cymbal, peaks and troughs are led by fearless baritone guitar and measured amplifier feedback, finishing large with help from a tom drum rhythm.