Lipstick and Spurs - One Hundred To One 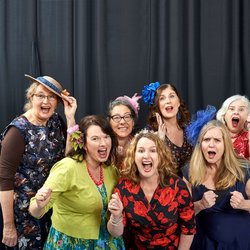 Lipstick and Spurs released the Golden Guitar nominated "One Hundred to One" in September 2019, following from their 2017 release "Whislin' Dixie", also nominated for a Golden Guitar.

Founded in 2005, by artist Jenny Taylor, Lipstick and Spurs has performed at many festivals, and supported the likes of Susannah Espie and Greg Champion. Lipstick and Spurs’s repertoire is a mix of traditional and alt-country songs, some covers, some originals, with a preference for Australian Country. Always colourful and fun, the ladies bring joie de vivre to every performance whether it be an impromptu rendition of Hank Williams’ Why Don’t You Love Me Like me Like You Used To Do? with Macca on Australia All-Over, welcoming the afternoon train to Tamworth during the Country Music festival, or a gig at the Meeniyan Hall.


Nominated for a Golden Guitar heritage award, One Hundred to One is an upbeat celebration of Michelle Payne's historic winning ride in 2015 Melbourne Cup, securing her spot in Australian history.

Payne received "The Don Award" awarded to a sportsperson who, is considered to have most inspired the nation" Payne received international recognition when awarded the Longines Ladies Award, US.