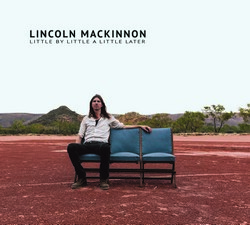 Rich in stories of survival, love, murder and mystery, this often-harsh yet beautiful environment has inspired a spree of prolific song writing and forged the creation of Lincoln's backing band 'The Wrecking Train'. While this new incarnation carries the same unruly swagger, The Wrecking Train has breathed new life into his music and energetic stage performance
Recorded & mixed at Headgap Studios in Melbourne, Lincoln MacKinnon is set for a mid February 2015 release of 'Murder in The Market Place' - the first single from his debut album 'Little By Little a Little Later'. The album will be released nationally in March 2015.

Following on from his debut album, Lincoln MacKinnon & The Wrecking Train are currently in the studio working on their second album, 'Sparks Will Fly', which is set for mid 2015 release.

So kiss your mangy dog goodbye, it’s time to knock over some beer glasses as Lincoln MacKinnon and The Wrecking Train bring their savage glee to the stage, to the world