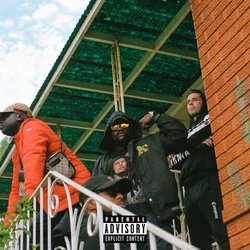 As a teenager, he taught himself to write, record and mix tracks between his bedroom and a music studio in a Blacktown community centre. Spacely began putting his raps up on SoundCloud and quickly caught the ear of Melbourne label WVS, who released his first official single ‘You Know It’ in 2017.

From there, it wasn’t long before he started turning heads. 2017 also saw Spacely drop the anthemic ‘Dopeboy ft. Big Skeez’ and return the next year with the heaters ‘#Code’ and ‘Don’t Approach’, the latter of which was premiered by Zane Lowe on his Apple Beats 1 show.

Things have moved just as fast on the live front. Already, Spacely’s played at FOMO Festival alongside Post Malone and SZA, shared a Listen Out line-up with A$AP Rocky and Skepta, and been picked for shows curated by the tastemakers at Red Bull Music.

2018 also saw Spacely collaborate with Manu Crooks and B Wise on ‘Best Years’, the hit track that’s amassed over 1.8 million streams on Spotify. His music has also played on MTV Australia, scored airplay on triple j, been supported by Briggs on his Beats 1 show and featured heavily in Spotify’s curated hip-hop playlists.


Of the track, Spacely shares, "Nowadays I hardly write pen to paper, I just sit there and meditate to what I’m hearing and play off muscle memory. OH NO! was self produced and self mixed, you know we have the tools now to write with other people, other producers but OH NO! was organic.”