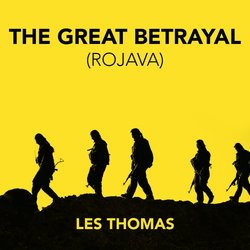 Les Thomas is a Melbourne-based singer-songwriter and activist who follows in the tradition of musical storytellers like Joe Hill, Woody Guthrie and Steve Earle. Noted for his passionate and engaged live performances, Les never hesitates to commit to the stories and people he sings about. As a stolen generations descendent via his mother’s side, music has proved to be an important pathway for reconnecting with his Aboriginality and cultural connection.

His debut single ‘Song for Selva’ is based on a letter from a Tamil asylum seeker who had been detained without charge for 37 months. After strong community radio support for the song in the first week after its release, Selva was removed from Broadmeadows detention centre into “community detention”.


The Great Betrayal (Rojava) highlights the plight of Kurdish people in the Rojava region of north-eastern Syria in the wake of the US's military withdrawal and Turkey's subsequent invasion. There is a famous saying that the Kurds have no friends but the mountains. This song is a call for global solidarity and support.