Amrap's AirIt | Australian Music Radio Airplay Project :: Pop :: Leo Sayer - How Did We Get So Old

Leo Sayer - How Did We Get So Old 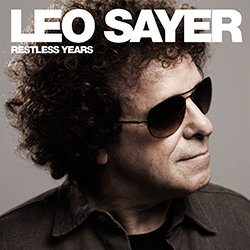 Leo is about to release his first studio album in six years with 13 brand new songs ranging in a variety of genres from Pop to Country to Rock. His live performances are legendary and he’s touring Australia for the first time in four years (from February 4) to celebrate the release of the album “Restless Years” January 23, 2015.
RESTLESS YEARS was produced by Leo Sayer with ARIA Award winning Engineer, Mitch Cairns. The album was recorded at Little Red Jet Studios in Melbourne and mixed by the legendary John Hudson of London’s Mayfield studios who like Leo, now calls Australia home.
All of the music on the new album was written by Sayer along with Albert Hammond (who co- wrote When I Need You) on four songs and Frank Farrell on one. Playing on the album are Johnny Salerno (drums), Mitch Cairns (bass), Bill Risby (keyboards), Danny Spencer (guitars), Mark Kennedy (percussion), Ross Irwin (trumpet and flugelhorn), Paul Williamson (saxophones), Keiran Conrau (trombone), and Natasha Stuart, Vika Bull and Linda Bull on backing vocals.


"I’m loving being in my 60’s. It’s fun! Kids think you’re smart, people open doors, you get your own dedicated car spaces, get charged less for things. But I’m a child in my mind, and sometimes I get disappointed when I look in the mirror...surely that guy can’t be me?"...Leo