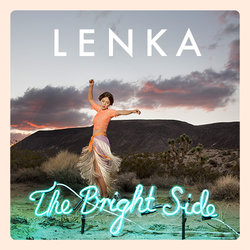 “My aim with music is to create mood enhancers for people,” says Lenka, whose fourth indie-pop album, The Bright Side, drops June 16th. “That gives me the most joy, when people say my music makes them feel better.” And the Australian singer-songwriter’s gift for sharing her bliss has served her well.

Whether or not you realise it, her buoyant, wistful songs—most notably “The Show” (off her self-titled debut) and “Everything at Once” (from Two, her follow-up)—have been sound-tracking your life for almost seven years now. She’s lent levity to several commercials including spots from Windows 8, Old Navy, and Coke; charm to dramedies like Grey’s Anatomy and Ugly Betty; and imbued films such as Moneyball with graceful poignancy.

Since first dropping music seven years ago, Lenka has charted hits everywhere from Germany to China. And her videos, which she art-directs with her artist-husband James Gulliver Hancock, have racked up tens of millions of views.


It's about hope for the future and a feeling of certainty that everything will go our way. It's about seeing though the dark and stormy times with the ones you love.