Lee Kernaghan - Spirit of the Anzacs 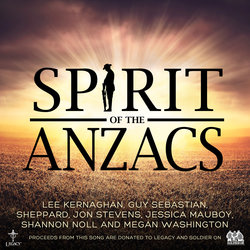 Lee Kernaghan is one of Australia’s most prolific country music artists. He has earned 3 ARIA Awards for Best Country Album, 33 Golden Guitars, and has achieved 33 No.1 hits on the Australian Country Singles Chart. Lee has sold in excess of 2 million albums in the Australian market. In 2008, Lee was named Australian Of The Year for his service to rural and regional Australia.

Lee’s most recent release, ‘Beautiful Noise’ scooped the pool at the 2014 Country Music Awards of Australia, picking up awards for Single of the Year and Music Video of the Year (Flying With The King), along with Male Artist of the Year and Top Selling Album of the Year.
‘Spirit Of The ANZACS’ in 2015 will be Lee’s eleventh studio album.

From Lee Kernaghan's forthcoming album 'Spirit of the Anzacs'


Other tracks by Lee Kernaghan: I Will Always Be With You
%