Laura-Therese Davis - Rather Live In The Country 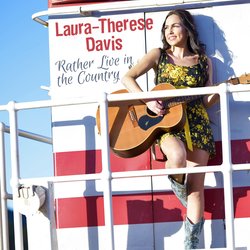 Laura-Therese's connection to the land and love of horses have helped bring her to country music. Born in Sydney with a spirit raised in the country, Laura packed up her horses, Bonnie and Polo, and moved north to a property near Maclean NSW in 2015 but has recently returned to Sydney. This is where the inspiration for her debut country recordings have transpired.

Drovers, cattle stations, and farms light up the Davis family-tree. Whereas for Laura, creating and performing music has always been something she loved. The singer-songwriter has been performing since she was four years old. Over the years, Laura-Therese has been involved with musical theatre and shows, the extras and commercial acting scene also attending ATYP (Australian Theatre For Young People). She began performing on the live music circuit in Sydney at 17 and has played inner-city bars, country pubs to the Sydney Opera House and everything in between. Drawing inspiration from a broad range of musical greats such as Loretta Lynn, Dolly Parton, Glen Campbell, Wanda Jackson, KD Lang and Paul Kelly, Laura-Therese comments, “I take inspiration from great songwriters, lyricists and story tellers”.


With a fun, bold, catchy chorus, the upbeat track makes you want to tap your cowboy boots and keep dancing into spring and summer. Featuring good friend Mal Eastick (Australia’s blues-rock guitarist, who found fame in 1970s’ award-winning country-rock band Stars), this is an anthem for all country folk to be proud of where they’re from.