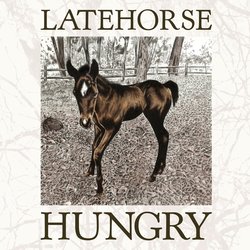 Hailing from the south west region of Western Australia, 'Hungry' is the second EP from solo folk rock musician Latehorse. The release comprises five original tracks which were recorded at Sonic Lolly studio in Margaret River with Producer Noah Shilkin. Latehorse released his debut EP ‘To The Bloom’ in 2013 also with Sonic Lolly.

Following on from the debut, in 2014 he featured on West Australian Music’s (WAM) ‘Sounds of the South West’ compilation album. With growing popularity, Latehorse has performed at several major festivals including Perth State of the Art Festival, Nannup Music Festival and Emergence Creative Festival, along with other local events and venues.

He opened for Samantha Jade as part of a Regional Pop-Up Gig, and recently supported iconic rock band Dragon at their Bunbury concert as part of the Endless Summer Tour.

With another album already underway, Latehorse aspires to engage new audiences and to continue to share his music as an Australian artist.


'Hungry For Your Love'. The title track from the newest EP by Latehorse. It's based on the false sense of security we sometimes get, that the things closest and most important to us are fine, When in fact they're not and often need our help the most.

Other tracks by Latehorse: Flower Before The Seed  -  Rain Aint A River
%