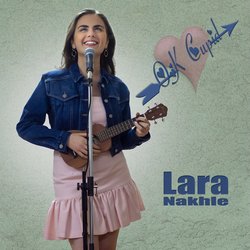 Lara Nakhle is a blind, New Zealand born, Australian of Lebanese origin, who discovered her talent and passion for music at a very young age. She started playing piano from the age of two and singing followed soon after. From the age of five, Lara has performed at various events around Sydney, including charity fundraisers, corporate functions and clubs. In 2017, Lara had success as an artist on The Voice Australia, where she made it to the top 48. People have often described her voice as powerful, angelic and gifted. Whilst Lara has had a busy 2018 performing at the Invictus Games Sydney 2018 and several other events, she released her debut single ‘Love Left Behind’ on 16th November 2018 and so far in 2019, has won the TSA Talent Quest at Tamworth Country Music Festival and is completing the final 3 subjects of her Bachelors degree in Psychology whilst performing at several charity and corporate events.

‘OK Cupid’ is an independent release written by Roxanne Kiely in collaboration with Lara Nakhle and Stephen Kiely, OK Cupid was recorded and produced at ScoopFX studios in Sydney. Ukuleles, bass, programming percussion with various sound FX, and instrument arrangement by Stephen Kiely.


Ever looked for love with online dating? It's a crazy merry-go-round sometimes, finding that perfect partner, but when you do, you'll know it, Lara Nakhle, a 21 year-old emerging Sydney artist, takes a refreshing look at the highs and lows of love online with "OK Cupid", a catchy, uplifting song with an optimistic feel and with an unforgettable hook line!