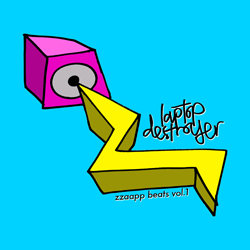 Kris Keogh, aka Laptop Destroyer, comes from one of the most remote parts of Australia, Arnhem Land, NT.

He has serious studio skills; Keogh designs his own custom audio processing software and recently mixed half of Sietta's new album, The Invisible River in his Darwin home studio.

This is the debut release by Laptop Destroyer, though in many ways this release sees Keogh coming full circle, returning to his roots.

Starting out in the late 90s producing abrasive fractured techno as Blastcorp, his quest to make the most beautiful noise (as he calls it) led him further and further from the dancefloor over the next decade.

After relocating to Japan and studying classical harp for a year, he returned to Australia and released Processed Harp Works, Vol. 1 under his own name on New Weird Australia in 2011. Described as 'Wild. Strange. Beautiful' (Flashlight Tag) it was equal parts ambient and noise.

But making art music simply can't rock a party... and so the Laptop Destroyer moniker was born!

Like a chainsaw slaying a thousand bouncy balls, Laptop Destroyer brings the noise on the first ZZAAPP Records release.

Written and produced in Arnhem Land, Northern Territory; its not just crocodiles and bush up there, you know!