Lanie Lane - Oh Well, That's What You Get Falling In Love With A Cowboy 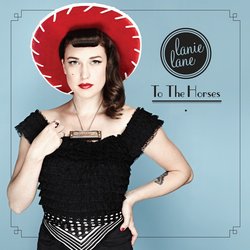 Her debut album is ‘To The Horses’, a collection of 11 songs that duck and weave through a heady mix of early rock ‘n’ roll, blues, and rockabilly, serving up fantastic tales of love, lust, heartbreak and the importance of a good guitar - all delivered by one of the most undeniably distinctive voices and charming characters in Australian music.

Recorded and mixed over a grand total of four days with her band at a studio in Sydney, the self-produced ‘To The Horses’ showcases Lanie’s irrepressible talent for crafting songs that are as raw and gritty as they are warm and inviting.

Written as individual pieces then recorded quickly in a manner reminiscent of years gone by – four people in a room playing music together, no more and no less – the songs sound live and alive.

“As in my writing sessions, when I record, I much prefer to capture what’s happening then and there to make sure the rawness of the music and band energy isn’t lost in obsessive re-takes!” says Lanie. “I love recording with my band all together in the same room.”


“Apparently I said that in my sleep. Of course I had to write a song about it” says Lanie explaining the origins of the track. Armed with just the phrase, she sat down with her guitar, and half an hour later the song came out fully formed.