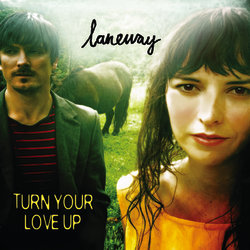 It started one summer in a West End share house – was crystallized with a short hand written letter – born in Melbourne and has been nurtured through landscapes vast and plenty. Now, deep in the forested hills of Natural Bridge, on the edge of an extinct volcano, amidst the speckled light of glowworms, tucked beneath damp and heavy air, hushed by the ripple of the spring fed creek is a cabin with a stone floor that is the home of Louise O’Reilly and Paul Hannan. Herein is the space where flowers in the hair, tapping of the boots, a swaying of the hips has been translated into the sound of the death of 1000 summers. The sounds of Laneway.

Their new album offering ‘Turn Your Love Up’ released in August through Crawler Records has been pieced together through recording sessions in spaces inspired and as diverse as their eclectic musical appreciations. From their own home in the hills to beautiful studios in Queensland, Northern NSW and Melbourne the album is a collection of ten new wonderfully composed songs displaying the gorgeous vocal and guitar melding we’ve come to expect from Laneway.


A swaying of the hips has been translated into the sound of the death of 1000 summers. The magical harmonies of Laneway carry this song along an open road of nostalgia, led by Hannan's delicate guitar riffs and the duo's sublime harmonies.

Other tracks by Laneway: Love is a Devil  -  Waiting For An Avalanche
%