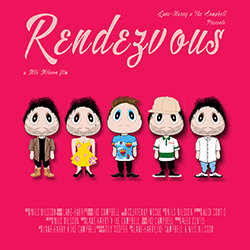 Over the past year rapper and producer duo Lane-Harry x Ike Campbell have shaken up the Australian music industry to a whole new level. After releasing their critically acclaimed debut album 'Love & Terror Cult' at the end of 2013 the 19 year olds followed the success immediately with the release of the ‘DMT’ mixtape which gained the attention of fans worldwide including Lorde, 360, Sedgyfergo, Matt Corby & Chet Faker.

When they're not feuding with rapper Allday, they're headlining packed out shows, supporting some of the biggest names in the industry & after releasing their new 2015 album 'Renaissance' with Human Records, they took out song of the year at the GC music awards. ‘Rendezvous’ is the 3rd single from the new album Youth, is being released one track a month. With Ike Campbell's hard hitting instrumentals, Lane-Harry's thought provoking lyrics, Guy Cooper's precise production and live orchestration. Rendezvous is set to be one of the biggest Australian hip-hop songs of the year. The new single and Youth album is gaining a lot of interest in the Aussie hiphop scene and the video follows on from the success of the 1st singles, ‘Netflix’ & ‘San Luca’.


Rendezvous’ is the 3rd single from the new album Youth, following the ‘Netflix’ and ‘San Luca’ singles. The hiphop duo are creating a video series for the Youthalbum, this 3rd single continues the story embedded from the previous singles, you can watch the whole series to date via www.lanexike.com