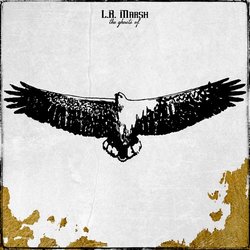 L.R. Marsh’s passion for music began at a very early age. Surrounded by music and art from birth, with his father’s own musical career and his sister pursuing visual arts, the guitar was an instant spark of interest. By age 9 he began collecting cassette tapes and fervently studying liner notes and lyrics for inspiration, which developed into a passion for poetry and songwriting. After joining a high school project band, L.R. Marsh met and collaborated with drummer Ed Noble, leading to the formation of the band Filthy Lucre, gaining significant attention from the blues and desert rock scenes both nationally and internationally.

Recently, L.R. Marsh began writing and recording his debut album, set for release in November 2019. The songs reflect on his own personal experiences and stories, with an intimate soundscape of acoustic guitar and enchanting harmonies, mixed with delta blues roots and rock elements to generate a unique and captivating sound.


Broke Bottle Blues, from the album The Ghosts Of is a dark and brooding blues rock track, featuring slide guitar for a classic delta blues tone mixed with 90s alternative rock vibes.

Other tracks by L.R. Marsh: Ghosts  -  Just Another Day
%