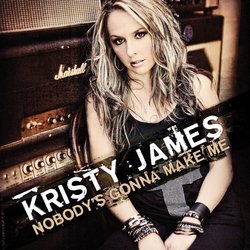 Newcastle-based artist Kristy James has been performing since she was 11 and was a Tuesday night regular at the Steel City Country Music Club. At the age of 14 she started her own business organising school discos and once Kristy turned 18 she started performing every weekend and hasn’t stopped for the past 10 years. Kristy released her debut single, the self-penned 'Overdrive' in December 2012. Assembling a star-studded cast for her first professional outing, the track was produced by Hillbilly Hut’s Simon Johnson (Adam Harvey, Travis Collins, Buddy Goode), guitars and banjo courtesy of Glen Hannah, drums – Pete Drummond, fiddle - Mick Albeck, steel – Dave Ristrim, bass – Simon Johnson with backing vocals by Mike Carr & Aleyce Simmonds. The accompanying video clip was produced by Golden Guitar winning producer Glenn Wilson (Felicity Urquhart’s ‘Big Black Cloud’). Her debut EP "Nobody's Gonna Make Me" is set for release on Nov 13th. Kristy has written four of the five tracks and all written from true life experiences. The EP's title track and first single is co-written with APRA award-winning songwriter Mike Carr (Adam Brand, Melinda Schneider, Graeme Connors).


Co-written by Mike Carr and Kristy James, this is a powerful song with a powerful message. Kristy decided to write the song to send the message that at the end of the day it is her hard work and sheer determination that makes her who she is, not anybody else.