Kristy Cox - Right Where You Left It 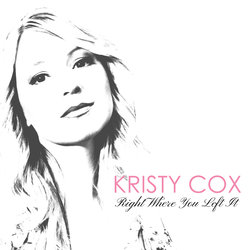 Kristy is one of the most refreshing and exciting names in bluegrass music worldwide. She has been consistently honing her craft since a young age and through her hard work and commitment - has received major support from key radio & television - as well as from her industry peers.

Her lalbum, "Ricochet", was released in January 2018 during the Tamworth Country Music Festival and hit #1 on the US Billboard Bluegrass Charts.

It was produced by renowned US producer & musician, Jerry Salley


Co-written by Kristy along with US hitmakers Jerry Salley and Alex Dooley, "Right Where You Left It" is the fourth single taken from Kristy Cox's latest album, "Ricochet".

"Right Where You Left It" is a 'story song' told in the most beautiful and unique way that only Kristy Cox can.