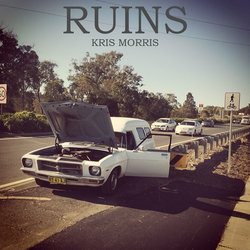 Kris has become a fixture of country legend, Bill Chambers', songwriting sessions. It's where he’s re-found his creative spark amongst a community of kindred spirits totally committed to the craft. Kris also found a cosy home in Kasey Chamber's alt-country jam band "Mama's Secret Garden." Thursday nights took him to a whole other universe.

With a bunch of new songs and a few prods from his new friends Kris found himself up at Nash Chambers' Foggy Mountain Studios making a record with Kasey Chambers and Bill Chambers as producers and an all star rhythm section. Recorded totally live, the album is a spontaneous explosion of heart and soul. Dirty, loud, bleak and beautiful. A break up record for the ages. The album titled "Ruins" will be released in September 2014.

Kris previously found his way back home to Australia having gigged around the UK for seven years. His EP Little Light (2007) and debut album I Think We Both Know (2009) received strong reviews admiring the honesty and passion of the songs and performance and opened opportunities to play at BBC Radio stations around the country. Seven years of hopes and heartaches summed up in beautiful gifts to take home.


Title track from the forthcoming album to be released in November. Produced by Kasey Chambers and recorded at Foggy Mountain Studios.