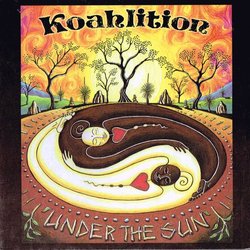 Koahlition is a 7 piece Reggae band from Far North Queensland. With indigenous and non -indigenous musicians their music speaks of social responsibility yet has a distinct sound described as Reggae with an Aussie twang. Aboriginal rock, good old Aussie pub rock bands and all the influences of jazz, rock, blues and soul may feature in their music. With three ladies on back-up vocals as well as featuring on a few leads the band has the old Bob Marley and the Wailers look to it. But everything old becomes new again as the band interprets Reggae in an Australian way. The band consists of singer/songwriter Rohan Rusch on vocals and rhythm guitar his partner Tracy Rusch on vocals and percussion ,son Adric Rusch on Bass,some deadly lead breaks by guitarist Moses Warusam compliments the band well with Djabuguy drummer Aaron "bigmo"Riley on drums and Sharmaine Driberg-Cullen and Tanya Volentras on vocals. The band has just released their debut album "Under The Sun" which has been produced by Ben Hakalitz of Yothu Yindi fame .The lyrical content of the songs are real and speak of real issues concerning all of us.


"High Life" a song about over indulgence. The mining industry and the ordinary worker. How much should we take and at what expense to the Earth?

Other tracks by Koahlition: Mary  -  This Land
%