Knievel - Through The Rainbow Dark 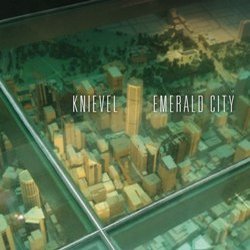 The four band members have retained an enduring musical chemistry despite playing in many other projects over the years. Tim Kevin (Youthgroup, The Exiles, Jim Moginie and the Family Dog); Nick Kennedy (Jack Ladder,The Dead Sea, 41 Drums by Nick Zinner); while Wayne Connolly received ARIAs for his production work with Josh Pyke, Paul Dempsey and You Am I, and Tim Kevin is also gaining recognition as a producer with credits for Youthgroup and Toby Martin.

“Knievel have slowly and surely carved out their own unique and brilliant space across the last 15 years ... Emerald City is their high watermark. If you love Yo La Tengo, Galaxie 500, Luna, The Bats etc; or if you don't know these bands and just love intelligent dreamy guitar pop, then you must check out this song and video and then the album.” – John O’Donnell


'Through The Rainbow Dark', one of the first tracks penned for Emerald City, is a dreamy, wistful reverie that Wayne Connolly says was partly inspired by a friend who moved overseas after being ostracised from his family. He says 'we followed the three H's: Harmonies, High Bass and (no) Hi-hat


Other tracks by Knievel: The Time I Found My Feet  -  They Listen Out