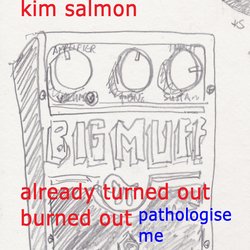 Kim Leith Salmon is an Australian music icon with a 40+-year career with The Cheap Nasties, the Scientists, Beasts of Bourbon, Kim Salmon and the Surrealists, Kim Salmon and the Business and The Darling Downs (among others). Kim is an inductee of the West Australian Music Industry Association Hall of Fame and the EG Awards Hall of Fame. Originally aspiring to be a nuclear physicist, he was swayed by the sounds of rock’n’roll and became a Scientist. Hailed as ‘The Godfather of Grunge’, Kim is set to release his solo album "My Script" in March 2016. "My Script" was produced by Myles Mumford and will be released via Kim's imprint, Guilt-Free Records.


"Pathologise Me" is the AA-side single from Kim Salmon's album "My Script" and harks back to the singer-songwriter roots of a bygone age, albeit one who's spent some hard time in introspection.

Other tracks by Kim Salmon: Already Turned Out Burned Out (Fast Burn)
%